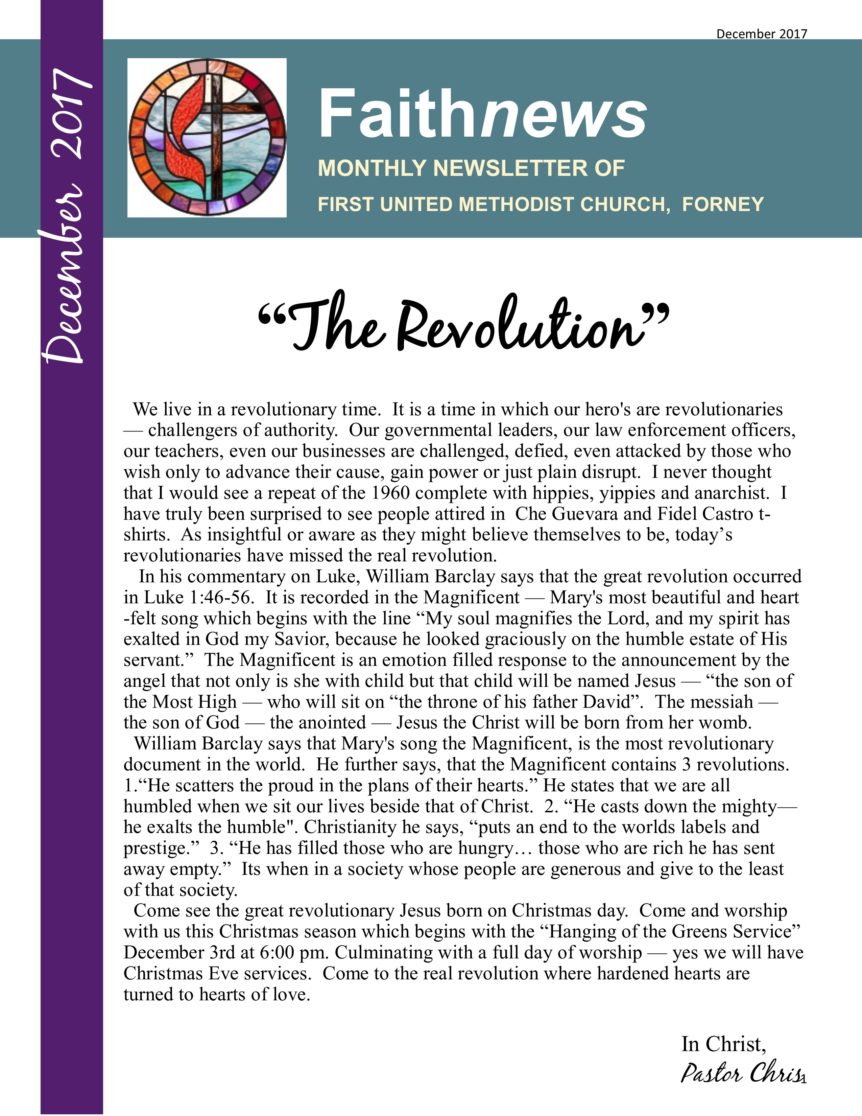 We live in a revolutionary time. It is a time in which our hero’s are revolutionaries — challengers of authority. Our governmental leaders, our law enforcement officers, our teachers, even our businesses are challenged, defied, even attacked by those who wish only to advance their cause, gain power or just plain disrupt. I never thought that I would see a repeat of the 1960 complete with hippies, yippies and anarchist. I have truly been surprised to see people attired in Che Guevara and Fidel Castro t-shirts. As insightful or aware as they might believe themselves to be, today’s revolutionaries have missed the real revolution.

In his commentary on Luke, William Barclay says that the great revolution occurred in Luke 1:46-56. It is recorded in the Magnificent — Mary’s most beautiful and heart-felt song which begins with the line “My soul magnifies the Lord, and my spirit has exalted in God my Savior, because he looked graciously on the humble estate of His servant.” The Magnificent is an emotion filled response to the announcement by the angel that not only is she with child but that child will be named Jesus — “the son of the Most High — who will sit on “the throne of his father David”. The messiah — the son of God — the anointed — Jesus the Christ will be born from her womb.

William Barclay says that Mary’s song the Magnificent, is the most revolutionary document in the world. He further says, that the Magnificent contains 3 revolutions. 1.“He scatters the proud in the plans of their hearts.” He states that we are all humbled when we sit our lives beside that of Christ. 2. “He casts down the mighty—he exalts the humble”. Christianity he says, “puts an end to the worlds labels and prestige.” 3. “He has filled those who are hungry… those who are rich he has sent away empty.” Its when in a society whose people are generous and give to the least of that society.

Come see the great revolutionary Jesus born on Christmas day. Come and worship with us this Christmas season which begins with the “Hanging of the Greens Service” December 3rd at 6:00 pm. Culminating with a full day of worship — yes we will have Christmas Eve services. Come to the real revolution where hardened hearts are turned to hearts of love.